Capacity-building for Discussing Aboriginal Topics in the Classroom

In the post-secondary classroom, discussing Aboriginal topics can be a challenge, both for students of Aboriginal and non-Aboriginal heritage, and for their instructors. A constructive and respectful dialogue around these issues requires a deep level of understanding, yet the complex history that informs these topics makes it difficult for students to enter these conversations, and for instructors to guide them.

In a CTLT Institute session entitled Instructor Capacity-building for Working with Aboriginal Topics in Diverse Classrooms, participants were encouraged to address these challenges head-on. To assist instructors, students, and administrators with having more in-depth discussions around Aboriginal content, workshop presenters Amy Perreault, Coordinator of Aboriginal Initiatives at CTLT, and Erin Hanson, Research Project Manager for the First Nations Studies Program, introduced two of their most recent research projects. Developed through UBC’s First Nations Studies Program (FNSP), the What I Learned in Class Today video puts a spotlight on some of the issues that are prevalent in the classroom. The Indigenous Foundations website, which was just recently launched, showcased one example of how these issues are being addressed. Together, the projects sparked a lively and thought-provoking dialogue that deconstructed the issues, and inspired thoughts about possibilities going forward.

To begin the session, Amy suggested a round of introductions among participants to understand what participants were each hoping to learn. Despite differing experiences, everyone in the room was interested to learn how to address Aboriginal topics more effectively. Amy shared her own background, discussing how the What I Learned in Class Today and Indigenous Foundations projects came to life. The projects evolved while Amy and her research partner were undergraduate students in the FNSP. While taking classes from other departments on campus, they often encountered situations where the discussion became difficult when it crossed into Aboriginal content. They were disappointed with the conversations, which reflected a shallow understanding both from other students, and from their instructors. Amy recalls, “We found it difficult to go into other courses where there was Aboriginal content, but people’s understanding was often limited.” The lack of understanding meant that students would often make ignorant, even racist comments that were not being addressed in the classroom. 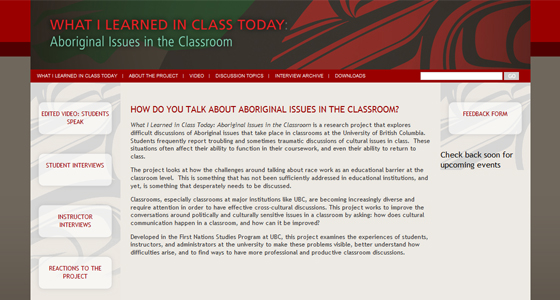 As the comments were not being addressed appropriately within the classroom, Amy would discuss the remarks with her FNSP peers, who often shared similar experiences. The conversations were a way for the students to address the issues, because they certainly could not forget them. One day, the students realized that their casual chats could become much more powerful. Amy recounts, “Someone suggested that we should record our stories, pointing out that our experiences were identifying serious issues around the level of discussion of Aboriginal content in classrooms at UBC.” Driven to improve the discussions in classes, the students set out to “create a public record of their experiences, which could make the experiences visible, and help to identify the dynamics that are underpinning them.” The result is What I Learned in Class Today, a digital video project led by Amy and fellow FNSP alumna Karrmen Crey. The video is twenty minutes long, and incorporates interviews from nine Aboriginal and non-Aboriginal students, as they discuss their most memorable classroom experiences dealing with Aboriginal subject matter. The final outcome is a moving, sometimes shocking video that effectively engenders a dialogue about the issues in addressing Aboriginal content in the classroom.

After the introduction, participants viewed the video and engaged in a lively discussion around these issues. Participants had an opportunity to discuss the video with Linc Kesler, FNSP Program Director and Associate Professor, and Francine Burning, a current Master of Arts candidate, who is one of the students who contributed powerful insights as a featured student in the video. The dialogue touched on the difficulties that can surface in the classroom, and the extent of the instructor’s role in facilitating these conversations. Among some of the issues, participants noted that there is a need to move away from addressing Aboriginals solely as an “issue-laden”, problematic topic, and that like any ethnic group, Aboriginal students should not be singled out in the classroom. The role of the instructor was also an interesting point of this discussion. Linc provided perspective from his experience teaching Aboriginal content in a required course at Oregon State University. The course drew a wide range of students who were not always prepared to deal with Aboriginal topics. To promote a deeper understanding of a particular topic, Linc would challenge students with intellectual prompts, such as “would anyone like to step in and think about it from a different angle?” or “what would it look like, if we looked at it from this angle?” He explained, “At some point in that exercise, students who are already in that [thinking] space but may not want to venture out can see that the opinion is in the room, they can see that it’s a way of thinking that other people have access to. That’s a possibility of actually creating some inter-cultural and inter-experiential understanding.” When dealing with an ignorant or racist comment in the classroom, Linc is a proponent of mobilizing the class to arrive at the right answer, on their own. He says, “I don’t think our purpose should be prescribing answers, our purpose should be developing a way of thinking about it, because these conversations will all arise in different situations…Try to get that person to articulate their position, why they feel the way they do, and try to create the circumstance where everybody else in the room can decide whether they want to align with this person, or distance themselves. You mobilize the students.” 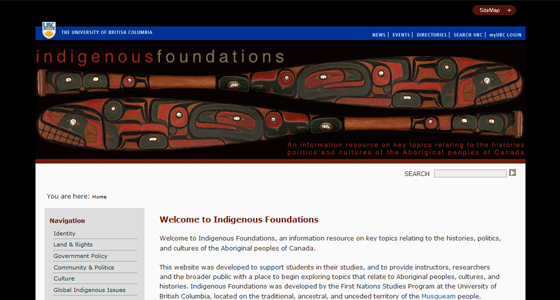 The Indigenous Foundations website is one immediate answer to What I Learned in Class Today. Following the video Erin introduced the brand new website, which was developed to address critical Aboriginal knowledge gaps in the classroom. She says, “One of the things that came up from What I Learned in Class Today, was a lack of historical knowledge. People are coming to university with such different levels of knowledge, and even the kindergarten to grade twelve experience [in British Columbia] does not necessarily prepare people to have these discussions.” Students are not alone, as it can be overwhelming for professors as well. The goal was to make the knowledge accessible for everyone. Erin explained, “What we decided to do was create this informational resource that would be welcoming for people, in a non-intimidating and digestible way, that could facilitate dialogue.” The result is a peer-reviewed, academic resource that students, faculty, and staff from any discipline can use. The site is organized to provide concise information, but not to over-simplify: “We wanted to make sure that people understand that these topics occur in a much broader context, and they need to take that a bit further. We have the recommended resources list, so we always give people further reading, further places to go. We see this as just that jumping off point, so people can feel more comfortable and more confident wit the subject matter.” One of the most interesting features of the site is a unique mapping tool that charts the relationships of content on the site, to express the interconnectedness among the various themes. Erin says, “You can see the web of how things are interconnected. But also, it’s a reminder that everything is in relation… That it grows. That there’s more.” In the future, the site will be an ongoing resource for anyone who is looking to explore Aboriginal content at UBC. As the site evolves, Erin plans to build Indigenous Foundations into course programming across campus.

In the coming year, Erin and Amy have a lot to offer the UBC community, with a variety of panels, workshops, and presentations in association with their projects. They encourage everyone to attend, and to continue the meaningful discussion they have ignited around improved teaching and learning of Aboriginal topics.