Territory Acknowledgements in Teaching and Learning at UBC Panel and Webinar

On October 4th, 2016 CTLT Indigenous Initiatives partnered with the UBC Learning Circle to open up our usual Classroom Climate sessions to a webinar audience. This format provided an interactive space where participants from a variety of communities and locations at UBC and around the country could participate in a dialogue around territory acknowledgments.

Dr. Linc Kesler, Special Advisor to the UBC President on Indigenous Affairs and Director of the First Nations House of Learning  opened up the session by acknowledging where we were located, on the ancestral, traditional and unceded lands of the Musqueam peoples. He contextualized his words around the actions taken in addition to speaking the words of an acknowledgement. He said:

“We are acknowledging that a history is here and happened and that there are still people here and that we have a relationship with them. And we are not going to erase that and be silent about that…And that’s a pretty good starting point compared to where we have been.” 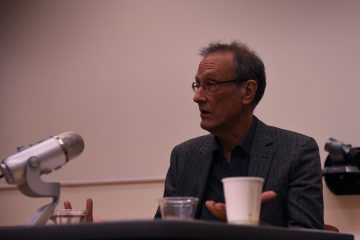 Also on the panel was Dr. Daniel Heath Justice, Chair of the First Nations and Indigenous Studies Program. Like Linc, Daniel spoke about the need to take the acknowledgement as a starting point. In his opening comments Daniel also said that acknowledgements should be grounded in ongoing struggles communities are facing. When asked if territory acknowledgements were political Daniel responded, “Absolutely. So is the lack of acknowledgements.”

Later in the session we were joined by Dr. Liisa Holsti and Dr. Rima Wilkes. These faculty members have initiated conversations around territory acknowledgments in their own departments and shared what changes they have seen as a result of doing so. From their reflections we learned that there is continued support for these conversations on campus and that UBC is not the only institution beginning to acknowledge land and build relationships with the Indigenous communities where their institutions are located.

Participants who were joining us via the webinar had several good questions for the panel. Some of these included:

Reflecting on the webinar portion of this event, it became clear that this space and format fosters peer-to-peer sharing of ideas, resources and thoughtful dialogue that complimented the panel discussion. We are grateful for the support and partnership with Divinia Ridley, Program Coordinator at the UBC Learning Circle, and Leah Walker, Associate Director, Education, at the Centre for Excellence in Indigenous Health.

Near the end of the conversation, a member of our audience asked a question about mandatory Indigenous courses at the university. A recent news article was mentioned that addresses some of the complexities of implementing mandatory courses, especially relating to student engagement and student experiences. Read or listen: “Who’s teaching mandated Indigenous content? Students call for more training for professors,” CBC Unreserved with Rosanna Deerchild, October 2, 2016).

Information on the Musqueam and UBC relationship with a video welcome from Musqueam elder sʔəyəɬəq (Larry Grant) and an explanation by Dr Linc Kesler, Associate Professor of First Nations and Indigenous Studies and Director of the First Nations House of Learning, about why we acknowledge Musqueam territory.